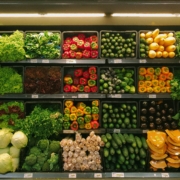 When chemicals and medicines are analyzed for toxicity, a series of laboratory tests are done to show when 100% of test animals will die. Today, many chemicals are tested via computer models so that life forms, such as rats, mice, monkeys, and rabbits won’t die in the testing process. Once the LD100 (100% death dose) is established, the lethal dose chemical concentration that will kill 50% (LD50) is determined and exposure limits are calculated from there. The Canadian Centre for Occupational Health and Safety (ccohs.ca) does a very good job of explaining how and why the testing is done.

This sets the stage for what our kids are being exposed to. You see, sources of fresh fruits and vegetables are not set up to give us this information. And to be honest, nobody outside of toxicologists would understand it anyway. Getting toxicity data of the herbicide Dicamba, which could have carried over from the adjacent fields, is going to be tough. Studies just aren’t done on carry-over, other than to say carried-over herbicides could be detected when testing organically identified crops.

In a way, chemical testing is in its infancy and depends on several factors. Animal models don’t always tell us how people will respond. The 14-day observation period used after the final dose has been administered to the test animals may not be enough time. Teratogenicity (the ability to cause developmental anomalies in a fetus), and mutagenicity (the ability to cause genetic mutations) are two areas still being studied but in a nutshell, “we’re still not there yet” in terms of how the human body is affected by chemicals on or in our food.

So, this is where getting all that “stuff” off fruits and vegetables becomes important. Nobody is telling us what’s on the produce. Nobody is venturing, in language, most of us will understand, what has been applied to the things we buy. Few raw produce providers have offered any information saying their produce has been washed, leaving it up to you and me to protect ourselves.

Washing produce with Life’s Pure Balance fruit and veggie wash does that. It gets rid of the waxes, herbicides, and pesticides if you follow the directions. It currently costs just 9-cents of wash and a gallon of tap water to clean a pound or more of produce. After a quick rinse, you’re good to go with safety and nutrition for your kids without having to understand the technical terminology of chemical testing.

Bill Adler is an expert in food safety, foodborne illnesses, and the foodservice inspection industry. He has conducted training for the Center for Disease Control and Prevention (CDC) teaching local, state, and federal disease investigators as well as working with laboratory specialists and epidemiologists. Bill has worked extensively with the Minnesota Department of Health (MDH) to perform food service inspections and train local and state public health employees.