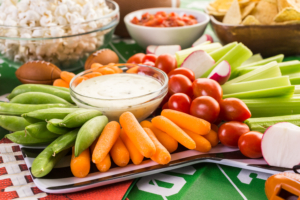 The Taste of Things to Come

After college, I discovered “dip” makes vegetables better. I was at an age where parties happened, and the veggie trays became my source of new vegetable experiences. Green peppers, cauliflower, cherry tomatoes, always smothered in French onion or creamy garlic. Unlike home, where most veggies came out of a can or seasonally available from Red Owl, this was new and sort of exciting. And then there were Chinese dishes and things like bamboo shoots, and lotus root, water chestnuts, and bok choy. I suspected what made them good was the cornstarch heavy ‘gravy’ everything was covered in. Eating vegetables, for the sake of eating vegetables just wasn’t something my generation did.

About 6 years ago, I met Gene Wood at a partner’s meeting. Our ad hoc partnering group was made up of businesses that centered around the food industry. Gene showed up in a plaid shirt and passed out grapes. But his grapes were different because he’d washed them. Looking back, we never really washed fruits or canned vegetables in our home. Maybe they got sprinkled with water, but this was direct from nature. It just had ‘ta be clean and nobody I knew ever washed an apple or rhubarb or the green beans we stole from Jack’s grandpa’s garden. But Gene washed them, and they tasted different. I got a second sample, and when nobody was looking, I took a third. There was something about these grapes that was appealing.

Through conversations at the meeting, we learned that lots of fruits and veggies are waxed. It was a way the food industry kept the moisture in between harvest and when customers got produce in the grocery stores. Gene had us try grapes right out of the bag, some that were dipped in plain water and some that had been washed in his solution. There was definitely a cleaner taste to the ones washed in his Fruit and Veggie Wash. The group commented on how the aftertaste was gone. Gene said the bitterness of the unwashed grapes was the wax. At the end of the meeting, he suggested an at-home taste test. He said to take an apple and just lick the skin. That awful, bitter taste was the wax and (everything under the wax) that came off with saliva. Then wash the apple, following the directions on the bottle. “Lick it again,” he said, “and see what you get”. There’s no question, clean is better!

So, what about this wax? If you google fruit wax, you’ll find some interesting history. At one time, back in the 1900s, fruits and vegetables used to be covered with lard to control the moisture loss during shipping and storage. But somewhere along the line, the industry went to a light coating of wax. Those waxes aren’t beeswax but are actually made from oil. They’re officially called parabens, and some are carcinogenic if enough is eaten. Granted, what’s on an apple or grape isn’t much, but constant low exposure can lead to bioaccumulation in various organs. Parabens, by the way, are known in the medical community as endocrine disruptors to kids and young adults. And while we want kids to eat a variety of fruits and vegetables, feeding them endocrine disruptors isn’t doing them any favors.

Clean produce is better for your health. It tastes better and is better for you because the wax is gone. If you want your kids and party guests to rave about your produce, cleaning will get their attention.

Bill Adler is an expert in food safety, foodborne illnesses, and the food service inspection industry. He has conducted training for the Center for Disease Control and Prevention (CDC) teaching local, state, and federal disease investigators as well as working with laboratory specialists and epidemiologists. Bill has worked extensively with the Minnesota Department of Health (MDH) to perform food service inspections and train local and state public health employees.

Carry Over
Scroll to top