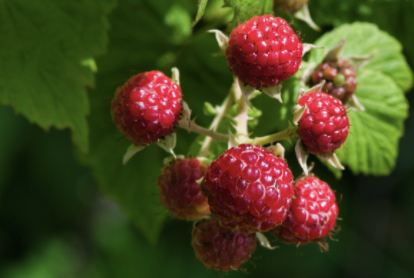 Most of my raspberries come from my 5 ft by 12 ft patch and become jam. This year, the raspberries started ripening in mid-June. This is odd considering all other years it has been mid-August.  Our funky Minnesota weather might have something to do with it. All I know is I collected over 600 berries last evening, and my daughter took the bulk of them. Along with the berries came dad’s advice to wash them because they were sprayed with apple tree spray.

Why would anyone spray apple tree spray on anything other than apples? Well, the last 2 summers, our apple trees, and the raspberry patch have been heavily infested with Japanese beetles.  The chemicals in the spray kill Japanese beetles and are conveniently found in both spray formulas. Suffice it to say; we’ve found no beetles on either this year. Both contain sulfur and Captan and a variety of other things.

Back when I was in college, I worked for a testing company that tested agriculture chemicals on farm animals and beagles. The Food and Drug Act of the time said that chemicals in which humans could be exposed had to be tested every 5 years. By today’s standards, the testing was primitive. There were no mass spectrometers, computer analysis, margins of error, molecular level determinations, or genetic anomaly testing. This often resulted in warning words on product descriptions, which I believe the public did not understand. “Warning, Danger and Caution” on a product label were the results, and that label information really never got to the consumer.  Thus, if the defoliant called “dioxin” was used and some carried over to row crops, that information was never given to the consumer.

We are not using DDT anymore. Dioxins that affect people have become severely restricted. But honeybees are being affected by nicotinamides, and that information is not provided at the consumer level. Similarly, Chlorpyrifos has been shown to have neuro-developmental effects on fetuses and newborns, but that information is not being shared in an understandable form for the general public.  If you want to see what is available, the USEPA has a 142-page analysis online of study data on Chlorpyrifos dated September 21, 2020.

All of this comes down to the US, the consumers, taking the time to clean our fruits and vegetables before eating them.  You don’t have to be able to pronounce or understand what might be on your produce as long as you actively work to get it off. Using enough Life’s Pure Balance fruit and veggie wash to create bubbles and letting your produce soak for 2-minutes or longer is going to take off the icky, un-pronounceable chemical residues. On top of that, getting rid of produce coatings gives them a much better taste and extends shelf-life.

A quick tip on raspberries.  I could go with mulching with slow-release organic source materials, but I don’t want to wait to have my berries pick up what they need.  Instead, I literally cover the garden with Miracle Grow crystals as soon as the snow has melted.  The rain “melts” it into the soil and the raspberry plants explode with berries every summer.

Bill Adler is an expert in food safety, foodborne illnesses, and the foodservice inspection industry. He has conducted training for the Center for Disease Control and Prevention (CDC) teaching local, state, and federal disease investigators as well as working with laboratory specialists and epidemiologists. Bill has worked extensively with the Minnesota Department of Health (MDH) to perform food service inspections and train local and state public health employees.